ZUK Edge now pictured in white/gold, to be priced at $390

The ZUK Edge is anything but a secret after being certified by TENAA a month ago, and subsequently appearing for some live shots (and again, and again). While the two color schemes were already confirmed by these sightings, we’re now treated to a high-res render of the white/gold option.

What that does for us is give us a much better idea of body proportions and screen-to-body ratio (pretty good) than the previous murky shots. Also it serves as yet another confirmation that the ZUK Edge won’t be much of an Edge, in the curved screen sense – just some 2.5D glass treatment. 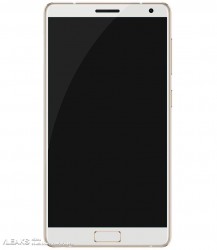 As for specs, TENAA’s listing was pretty detailed and we know that the FullHD 5.5-incher will be powered by the Snapdragon 821 and will sport a 13MP rear camera and an 8MP front-facing one. While the Chinese regulator quoted 4GB of RAM, an Antutu listing later cited 6GB, so there may be two versions.

Today’s leak gives us another number, though, and that’s price – at CNY 2,699 ($390), the ZUK Edge is set to be one of the most affordable Snapdragon 821 devices. Just as a reminder, the launch date has been confirmed for next week.