Why business has its back to the wall 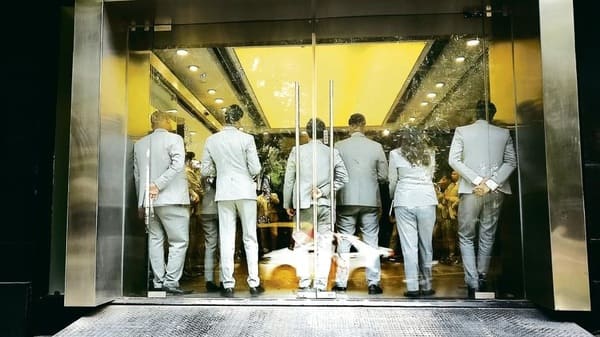 MUMBAI: On 12 August, when Gujarat-based Sintex Plastics Technology Ltd announced the sale of its overseas businesses to a clutch of private equity investors, life came full circle for its promoters. In July, the company had defaulted on ₹86 crore of debt repayment—something that was previously unthinkable for a company that owns the famous trademark Sintex, synonymous with rooftop water tanks. The default, a relatively small amount given the company’s past financial profile and scale of operations, was a tell-tale sign of how bad things were inside India’s business houses.

The promoters, the Patel family, had already pledged more than 80% of their holdings in the group and had been in the market to refinance existing debt for more than a year with little success. “Left with no choice, we had to sell our crown jewels,” Amit Patel, managing director of Sintex Plastics, told Mint. “The high cost of debt and the adverse market conditions made it simply impossible to go on and we were forced to sell (even) the profitable units.”

Amit Patel, maintains that he has spent the greater part of his life building the group from a single textile unit in the early 90s. He now thinks the good days may not be back any time soon. “I don’t see us investing in building assets in the foreseeable future and we will continue with only two business divisions like we did a decade ago. The financial distress has impacted us immensely at a personal level as well. The stress gets too unbearable at times for your body and mind.”

Like Sintex, similar stories of acute financial distress continue to unfold across the length and breadth of corporate India as weakening consumer confidence, an uncertain business environment, and regulatory risks take their toll, forcing businesses to downsize and, in some cases, pull down the shutters.

Early March quarter earnings indicate that the Indian economy has slowed down further with the much-awaited revival in earnings growth nowhere in sight. A Mint analysis of corporate results for the quarter ended 31 March showed that slower sales have dragged profits down to its slowest in at least 13 quarters. Another Mint analysis of 1,284 companies for the June quarter shows aggregate profit, adjusting for one-time gains or losses declined by 5.23% from a year ago. Net sales grew by just 4.6% during the quarter. Sector after sector—consumer durables, packaged consumer goods, passenger vehicles, and real estate—is facing slowing sales and displaying visible signs of a sluggish economy.

The situation is particularly grave for non-banking financial companies (NBFCs) and real estate, both of which are interlinked in multiple ways and are at the heart of the endemic economic slowdown. What started as a short-term contagion with the Infrastructure Leasing and Financial Services (IL&FS) Group’s collapse last year, now threatens to turn into a systemic fault line. Numerous NBFCs are desperately seeking to refinance past borrowings with limited success. The backlash has caught several prominent industry names, such as Dewan Housing Finance Ltd, on the wrong foot.

Even as the current situation—led by a combination of factors such as mounting debt, the impact of goods and services tax (GST), and growing tax vigilantism—has derailed economic growth, the government has maintained a studied silence. Given that many feel this downbeat feeling is here to stay, what can be done to quickly get consumers to spend, businesses to invest, and banks to lend?

Past is not past

So, how did things get so bad? The genesis of the current situation can be traced to the economic stimulus put in place in the months following the 2008 financial crisis, feel experts. “Lenders, especially public sector banks (PSBs), were encouraged to lend generously to the private sector to boost liquidity and demand,” said the former chairman of a large PSB, requesting anonymity. “It was a heady cocktail of easy money and sky-high ambitions and almost everyone lined up to fund expansions. Often, loans were sanctioned on the basis of projections of cash flows, much of which turned out be inaccurate and unsupported by the accompanying economic growth,” he added.

Viability of projects suffered due to a variety of reasons, which included delays in approval, land acquisition, power purchase agreements (PPAs), and so on. The period also witnessed numerous scams related to natural resource allocation and court cases, which further discouraged private sector from loosening its purse strings. But even as banks increased funding and the government stepped up public spending to revive growth—primarily through a consumption-led boost—an inadvertent outcome was spiralling inflation, which further went out of control due to the rain deficit during the monsoon. The rate of inflation started flirting with double digits in the subsequent months.

The Reserve Bank of India (RBI) responded, as it typically does, with 13 consecutive rate hikes between FY11 and FY13. While the rate hikes presumably helped moderate inflation, it also led to a significant rise in the corporate sector’s financing cost, which had over-leveraged itself to the hilt. “Many firms found it hard to service the high level of debt they had accumulated as their finance cost went through the roof,” said Mahesh Singhi, founder and managing director, Singhi Advisors, a Mumbai-based investment bank.

As the stress started showing, and often overwhelming corporate balance sheets, RBI began an asset quality review (AQR) programme for lenders in 2015, a vigorous review of their books of accounts, which laid bare large tranches of bad loans in the system. The central bank was worried (and rightly so) that banks were resorting to ever-greening of accounts by postponing bad-loan classification. By fiscal 2017-18, the banking sector’s gross non-performing assets (NPAs) had touched a whopping ₹10.3 trillion and at least 11 PSBs had been placed under the Prompt Corrective Action ( PCA) framework, leading to a further decline in lending.

Former chief economic advisor Arvind Subramanian referred to it as the twin balance-sheet problem—over-leveraged corporate books and bank accounts contaminated by bad loans—in one of his annual Economic Surveys. “It a known fact that any fast-growing economy like India will undergo transient phases of moderation and slowdown,” maintained Singhi. “We need to understand that the current economic situation is cyclical in nature and in a corrective phase,” Singhi added. The problem is compounded when a cyclical problem turns structural in nature, something that currently seems to be plaguing the Indian economy.

While the problem of mounting unserviceable debt has dragged on for several years, a slew of regulatory measures announced by the present government, ostensibly to clean up the system, further added to the uncertainty, even as the long-term benefits remain debatable.

For starters, the government’s shock to the system through demonetization nipped nascent growth resurgence in 2016. This was followed up with a flawed GST structure in 2017, which remains a work-in-progress even now. The numerous tax slabs under the GST have also brought significant compliance costs, especially for small and medium enterprises, further eating into their bottom lines.

A crisis of confidence

RBI, bowing to popular demand, has now reduced interest rates by 110 basis points in the past seven months. This was expected to kick-start corporate borrowing and rekindle household demand for consumer products and housing. Unfortunately, that is yet to materialize.

So, why aren’t banks lending despite having the means to do so in a benign interest environment? “It’s a crisis of confidence and not necessarily a problem with liquidity,” says Amit Patel of Sintex. “Lenders who have had years of business relations with clients are refusing to lend any more as there is not enough confidence that the business environment will improve in the near term and repayments will happen on time,” he added.

Amitabh Chaudhry, chief executive and managing director of Axis Bank, agrees. “This time, there are no sectoral NPA issues, if you forget real estate and NBFCs for a moment. It is just business groups that are either leveraged at the operating company level or promoter level which seem to be falling into troubled times,” Chaudhary recently told Mint in an interview. “And then, the economy is not helping. A lot of these assets (loan accounts) have been identified for exits sometime back, but we cannot exit them because the promoters or the operating companies don’t have the money to repay.”

Industry leaders maintain that the solution lies in a combination of immediate and long-term measures by the government. “The most obvious and welcome first-aid would be some temporary relief on the GST front, either by modifying the slabs, or, if that is not possible, by removing the cess,” Anand Mahindra, chairman of Mahindra Group recently told investors at the group’s annual general meeting. “Another suggestion would be a re-look at the registration fees which have gone up very substantially and a roll-back of the increases in road tax mandated by the state governments after the introduction of GST,” Mahindra said.

According to Society of Indian Automobile Manufacturers estimates, the auto slowdown has resulted in an 8% loss in GST collection in the first six months of 2019. Just to catch up with the FY19 GST collections, the auto industry will need to grow at a rate of at least 7% in the remaining eight months of FY20.

Mahindra is not alone in pointing to a demand slowdown, which is visible across rural and urban India. Amit Burman, chairman of Dabur India Ltd, told Mint: “While rural demand and sentiments have been hit by the agrarian crisis, the urban consumers have tightened their purse strings and are today spending less. There are two big things that I would expect the government to work on: First, higher spending on infrastructure. We need some big-ticket spends to boost connectivity with the remotest parts of the country. Also, this would have a multiplier effect on job creation, particularly in the hinterland. We sincerely hope the government will ease the agrarian crisis through a fiscal stimulus that may put more money in the pockets of rural consumers.”

The government can help with another contributing factor to the slowdown: regulatory tightness. Heightened tax vigilantism since demonetization had led to further uncertainty and fear psychosis. “There is a genuine fear that the tax man will be at your doorstep at the slightest suspicion and subject you to untold harassment, as highlighted by Cafe Coffee Day founder V.G. Siddhartha’s death,” said the chief executive of a multinational company, requesting anonymity. There are many anecdotal stories about harassment around taxation doing the rounds; experts agree that such a situation is not healthy for business as usual.

To be sure, many business leaders have been vocal on the issue. In a recent interview, T.V. Mohandas Pai, a former director at Infosys Ltd, alleged that tax officials who have to meet their annual tax collection targets put pressure on companies to pay up even if they do not concur with the amounts demanded, which leads to litigation. Even Kiran Mazumdar-Shaw, chairperson and managing director and founder of Biocon Ltd, has spoken of tax authorities deploying pressure tactics. Mazumdar told The Telegraph “a government official” called her recently and told her not to speak about issues such as “income tax harassment”. Clearly, something needs to be done to calm the waters here.

To conclude, the current economic quagmire seems to be intractable—farm crisis, jobs stagnation, demand slowdown, global trade wars hurting exports, fractured balance sheets (of banks, NBFCs and corporates), which need to be nursed back to health, infrastructure deficit, and so on. However, hope always trumps despair. The only catch is that the wellspring of such optimism now lies at the government’s doorstep.