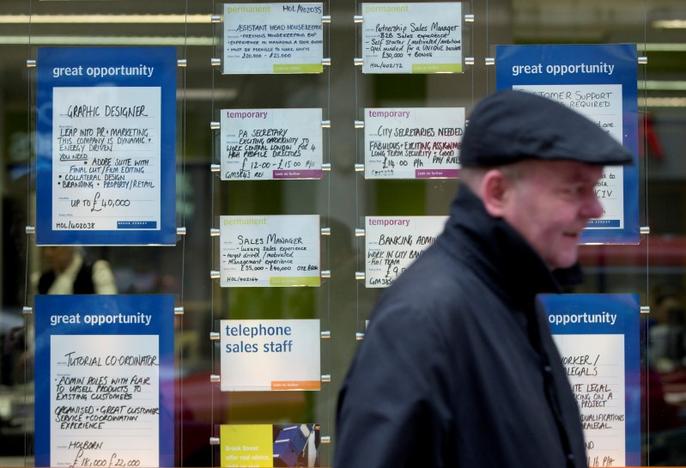 Britain’s labour market showed little sign of taking a hit immediately after the country’s Brexit vote as the unemployment rate held steady and job creation rose in the three months to July, according to official data.

But growth in wages slowed, possibly signalling tougher times ahead for households just as they face the prospect of higher inflation after the post-Brexit vote fall in the value of the pound which will push up the cost of imported goods.

The jobless rate remained at 4.9 percent, its lowest level since 2005 and in line with a Reuters poll of economists.

The number of people in work rose by 174,000, taking the employment rate to a new record high of 74.5 percent, the Office for National Statistics said on Wednesday.

The data, which pushed up the value of sterling against the U.S. dollar and the euro, follows previous signs that the labour market has largely weathered the initial shock of the referendum decision to take Britain out of the European Union.

However, the unemployment rate is widely expected to rise as companies wait for more clarity on the country’s future ties to the EU, which could take years to emerge.

Lower hiring by companies in some bellwether sectors could be “cracks in the ice” of the country’s labour market, a survey of employers showed on Tuesday.

The Bank of England has signalled a likely further cut in interest rates in November although some economists say the run of relatively strong economic data could cause it to think again. The BoE is expected to announce no change to rates and its bond-buying program on Thursday after its September meeting.

In July alone, based on a smaller and less representative sample of respondents than the main three-month measure, the jobless rate fell to 4.7 percent, the lowest since 2005.

JP Morgan economist Allan Monks said the figure could augur a decline in the main unemployment rate in the months to come, something which would be celebrated by the pro-Brexit wing of the ruling Conservative Party. However there were some signs that the labour market was losing steam, he said.

The number of unemployment benefit claimants – considered a potential early warning sign of an economic downturn – rose by 2,400 to 771,000 in August, compared with a fall of 3,600 in July, a smaller decrease than the ONS’s previous estimate.

Workers’ total earnings including bonuses rose by an annual 2.3 percent in the three months to July, slowing from 2.5 percent in the second quarter. Economists had expected growth of 2.1 percent.

Excluding bonuses, earnings rose by 2.1 percent year-on-year against expectations for a 2.2 percent rise and slower than in the three months to June. In the month of July alone, the slowdown in wage growth was sharper.

The Trades Union Congress, Britain’s largest labour group, said new British Prime Minister Theresa May needed to take action to live up to her pledge to create an inclusive economy.