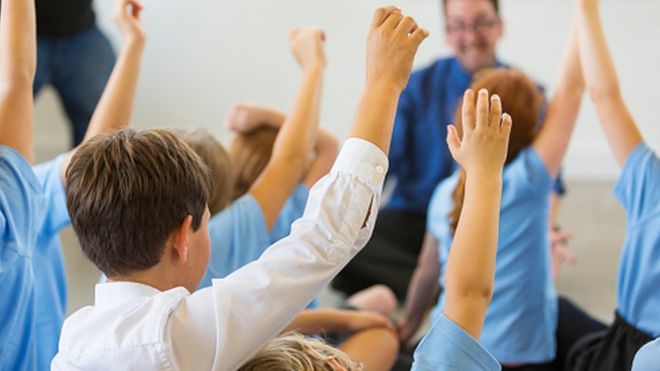 A senior academic has accused the Conservatives of a “sleight of hand” over the justification of its grammar schools policy in its manifesto.

She says families in the bottom third for income have been excluded from the calculation supporting this data.

The Tories stand by their manifesto.

The party argues that increasing the number of grammar schools will improve social mobility as more poor bright children will be taught by them.

It says that is because the achievement gap between rich and poor children closes to near zero in grammars.

However, Prof Sullivan, professor of sociology at University College London, said the main reason grammar schools were an “unlikely tool for promoting social mobility” is that working class children were far less likely than richer children to attend them.

The party’s manifesto says: “Contrary to what some people allege, official research shows that slightly more children from ordinary, working class families attend selective schools as a percentage of the school intake as compared to non-selective schools.”

Prof Sullivan disagrees with this statement, which is based on a piece of Department for Education research which sought to define the government’s term “ordinary working families”.

It described a new group of families existing on below average income, but not on the pupil premium or free school meals

According to the research 36% of pupils in grammar schools are from this group, compared to the 35% of pupils in non-selective schools.

The research also shows that in grammar schools 9% of pupils are either on free school meals or the pupil premium and 32% of pupils in these groups in non-selective schools.

These categories are usually a shorthand for disadvantaged children, many of whose parents will be on low pay or on benefits, or at least will have been in the past six years.

But these pupils, the poorest group of children, appear to be excluded from the Conservative Party figures used in their manifesto.

Prof Sullivan said: “They are flying in the face of all the evidence that we have and using a clear sleight of hand to represent the evidence to claim that grammar schools are taking their share of ordinary working class kids.

“It does seem that unless they’ve actually tricked themselves that they believe that the bottom third of families aren’t working class, or either they are stupid enough to think that they’re not, that they are actually using a bit of statistical jiggery-pokery.”

She adds: “The DfE figures in fact show clearly that pupils from families on below average incomes are far less strongly represented in grammar schools than non-selective schools.”

Prof Sullivan believes that there was no evidence that grammar schools would tackle educational inequality and increase social mobility.

Out of all manifesto plans, she suggests this policy is the one as least likely to achieve its stated aim.

“As well as improving our schools for the most disadvantaged children, we also want to improve education for children from ordinary working families.”