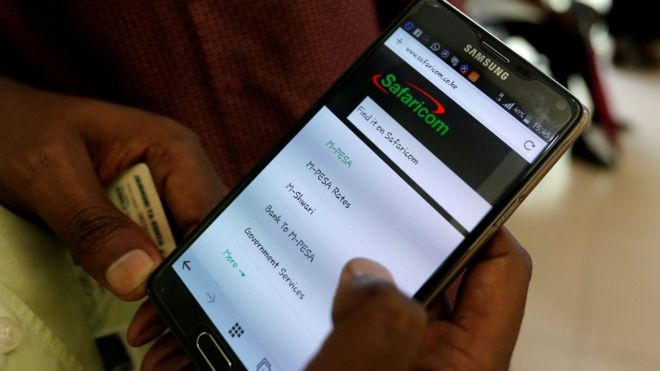 The stake in Safaricom is being sold by Vodafone as part of its drive to streamline its African businesses.

The deal will extend the South African firm’s influence in Kenya.

It will also help increase the use of Safaricom’s popular M-Pesa money transfer service across Africa.

M-Pesa, launched 10 years ago in Kenya by Safaricom, lets people without bank accounts use their mobile phones to transfer money.

However the tie-up comes just a year after Vodacom dropped M-Pesa in South Africa after it failed to prove popular with consumers.

That failure was largely attributed to the fact that possessing a conventional bank account is much more common there than in the rest of the continent.

M-Pesa is now available in Albania and Romania, as well as Democratic Republic of Congo, Egypt, Ghana, India, Lesotho, Mozambique and Tanzania.

It’s a family affair. While, at $2.59bn, this is a significant deal, the money actually stays in the Vodafone family. Vodacom of South Africa will buy up 87.5% of Vodafone Kenya, which means it gets 35% of Safaricom.

Vodafone International gets 226.8 million new ordinary shares in Vodacom, which will increase Vodafone’s stake in Vodacom from 65% to 70%. The ultimate aim is to spread Safaricom’s highly successful M-Pesa financial payment platform beyond Kenya.

Even though 10-year old M-Pesa has 26m customers, most are in Kenya. It was scrapped in South Africa last year, because of poor uptake figures. But that was because M-Pesa does better in markets that are less developed in terms of formal banking. So, Vodacom will be planning to introduce it to many of its 66.8m African subscribers.

But it won’t be all done and dusted behind closed doors at the Vodafone family mansion. The deal still has to be approved by regulators and minority shareholders in South Africa and Kenya.

The South African government owns a 14% slice of Vodacom and Kenya’s regulators could decide that the deal breaches an ownership threshold that would make it compulsory for Vodacom to make a bid for Safaricom as a whole.

The deal represents a big reshuffle of its African interests for the UK-based international phone company Vodafone, which owns 40% of Safaricom and also 65% of Vodacom.

The deal will be effected by Vodafone transferring a 35% stake in Safaricom to Vodacom, in exchange for Vodafone being given new shares in Vodacom worth $2.6bn.

Sibonginkosi Nyanga, an analyst at Momentum S.P. Reid, said the deal was likely to create value for Vodacom shareholders.

“Kenya is one of the leading countries when it comes to technology growth, so it presents quite a number of opportunities for a company like Vodacom.”

Safaricom is Kenya’s biggest and most profitable company and last week reported an 18% rise in annual profit to $470m.

Its chief executive, Bob Collymore, said it would continue to have a strong Kenyan representation at its board and management levels.