Pete Buttigieg’s Health Care Plan Is the Worst Yet 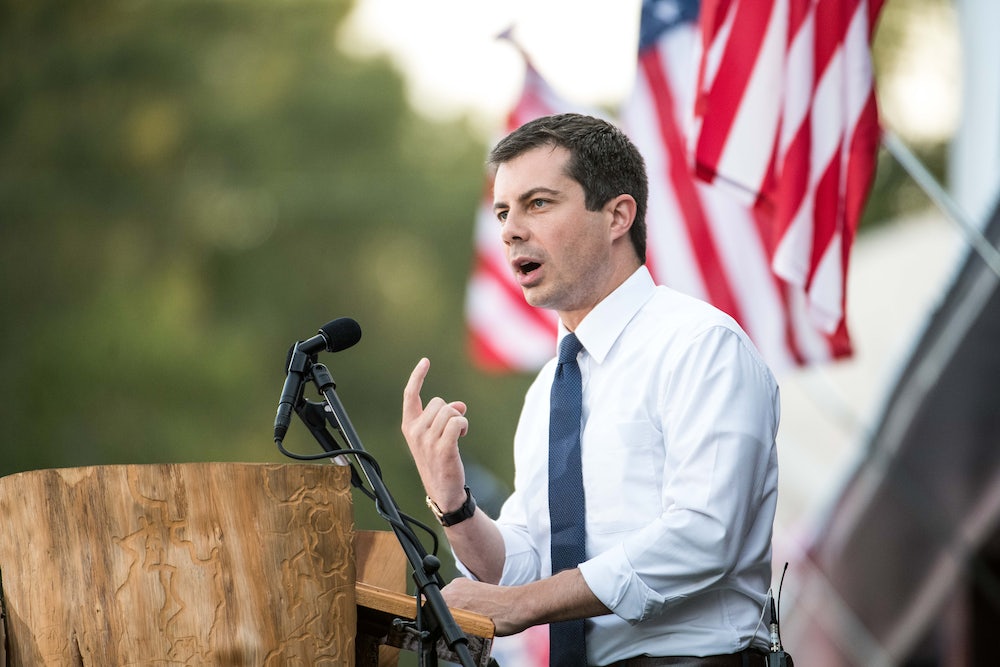 Rejoice, Democratic lovers of Plans, for your presidential field’s second-string wonk candidate Pete Buttigieg has produced details for his health care plan. (To be fair, this is more than can be said for the field’s starting wonk, Elizabeth Warren.) Despite his carefully cultivated image as a master squarer-of-circles—the only man on Earth to have surmised that policies should be based on evidence—his Medicare for All Who Want It plan is deeply stupid. It betrays a terminal case of Democrat Brain; it is a faux-technocratic fantasia soaked in the utterly meaningless jargon of Access and Affordability that won’t even accomplish the things it pretends to want. It is an insult.

These health care plans that rely heavily on the theory of a cure-all “public option” are all designed for the same purpose: Giving candidates space to convincingly claim they would provide universal coverage (or, if not coverage, at least universal “access”) while also preserving the role of private, employer-sponsored insurance. They exist to be an alternative to Medicare for All that successfully convinces voters, the media, and donors that universal health care is possible without all of the scary socialism.

As such, these plans strive to please the people who are currently served reasonably well by our current health care system, or who the Democrats think would be more afraid of change: people with good employer-sponsored plans, or people who are not chronically ill and don’t have much direct experience of how bad the system is. (More importantly, it’s people who are reasonably wealthy, whose votes Democrats are quite concerned about keeping.) Along the way, such plans allow those that propose them to lay claim to better prospects of passing a hostile, GOP-controlled Senate (which is naïve) while not engendering a wider war with any number of deep-pocketed health care industry pressure groups (which is also naïve).

But any plan must attempt to contend with the most appalling and gaping sore on America’s health care system: the 27 million people who lack insurance. Buttigieg’s plan claims it would “automatically” enroll the uninsured. First, “individuals with lower incomes in states that have refused to expand Medicaid will be automatically enrolled in the public option.” Joe Biden’s plan has a similar proposal, to essentially go around state governments that didn’t expand Medicaid by providing a subsidized public option that would mimic expanded Medicaid. (Somewhere in Washington, Samuel Alito’s loins are twitching.)

With very little detail as to how it would be brought about, Buttigieg also asserts that his plan would automatically enroll anyone “eligible for free coverage in Medicaid or the public option.” Here, the South Bend mayor targets a narrow population that is getting screwed over by the last big patchwork health care reform attempt: people who make too little to qualify for Affordable Care Act subsidies, but don’t qualify for Medicaid in states that did not expand Medicaid availability to the benefit of those who make less than 138 percent of the poverty line.

Buttigieg’s plan quietly acknowledges that there would be many holes in this automatic enrollment plan, by proposing an additional “backstop fund” to “reimburse health care providers for unpaid care to patients who are uninsured,” and retroactively enroll in the public option anyone uninsured whose care goes through this fund. The idea here, is that if you are uninsured and go to the doctor, the government will pick up the tab. This is laughable. Why would anyone choose to pay insurance premiums in the first place if the government is going to cover the entire cost for the uninsured? Isn’t this just a very convoluted way of providing government insurance to anyone who—stay with me—wants it?

Buttigieg offers no insight into how the government would reimburse providers in this scheme. If the government paid the full list price of charges, that would be obscenely expensive—hospitals essentially make up the prices they charge, and there’s wide variation in their list prices even within the same regions or cities. It would be ridiculous for the government to just pay up these fake charges and marked-up prices—this is why the government sets the prices that it will reimburse for Medicare patients, and state governments sets Medicaid rates, in the first place.

But if the government reimburses at Medicare rates, which are far lower than what insurance pays—or Medicaid rates, which are even lower than Medicare rates—providers won’t be happy. They will want their pound of flesh. Will they then be empowered to chase after individuals who were uninsured for the ‘difference’ between the government reimbursement and their arbitrary cost, just as UVA and other hospitals will pursue into bankruptcy patients whose insurance refuses to pay for out-of-network providers at their hospital? Mayor Pete’s plan makes no effort to answer this question.

The assertion that the government would “automatically” enroll people who are eligible is the most insulting of all. You cannot just say that automatic enrollment is going to occur; you have to explain how this is achieved. It’s a fairly important part of writing a plan. Buttigieg’s plan provides no indication of what mechanism the government might use to automatically enroll people.

The way in which Buttigieg hand-waves away this critical aspect of his plan isn’t even original, and it’s somewhat astonishing that he’s jumped into the middle of a similar controversy that erupted at the last Democratic debate without really attempting to resolve what was so controversial about it. During that debate, Joe Biden made a similar claim about his plan—that the uninsured would be enrolled through an “automatic buy-in.”

Biden’s plan is actually more specific than Buttigieg’s in this regard—it would automatically enroll people at less than 138 percent of the federal poverty level “when they interact with certain institutions (such as public schools) or other programs for low-income populations (such as SNAP).” If you are really committed to not providing universal health care, this is a decent way to get many people who should be covered enrolled.

Julián Castro heaped criticism on Biden for proposing that people should have to buy into the plan, and was, in turn, castigated by the media for this slightly flawed interpretation of Joe Biden’s verbal minestrone. But complaints about Castro’s lack of civility don’t alter the fact that an “automatic buy-in” doesn’t make a lot of sense. Similarly, Buttigieg can promise that there will be automatic enrollment, but you have to explain how that will happen. No social welfare program or benefit in America happens automatically, including Medicaid. We don’t even get our taxes calculated automatically by the government, which many other countries do without falling into the ocean.

So, how is Pete Buttigieg going to complete the heretofore unachieved task of automatically enrolling eligible people for government benefits? Is the government going to use annual tax filings to determine your income—which will be accompanied by insanely long delays in the so-called “automatic” enrollment? If we have automatic enrollment for these people based on their income, why not implement automatic Medicaid enrollment, too? What happens for people whose incomes fluctuate a lot, and who might drift in and out of eligibility for a free plan?

What about the rest of America, the ones who aren’t eligible for either Medicaid or a free public option? The way Buttigieg envisions it, people on the Affordable Care Act exchanges would see increased subsidies, linked to gold-level coverage instead of silver. (Even Gold plans only cover about 80 percent of costs.) One example given: a “60-year-old in Iowa making $50,000 and currently paying $12,000 annually in premiums will now pay no more than $4,250 annually for gold coverage.” Yes, it is true that $12,000 annually in premiums is an unconscionable disgrace. But so is $4,250, which works out to $354 a month.

And yet, this is something that’s meant to excite people. This is what Buttigieg believes will inspire Democratic voters to Pokémon Go to the polls. By contrast, Bernie Sanders’s Senate office estimates that under his Medicare for All bill, “a typical family of four earning $50,000, after taking the standard deduction, would pay a 4 percent income-based premium to fund Medicare for All—just $844 a year—saving that family over $4,400 a year.”

Only 11 million people are on the ACA exchanges; what about the rest? Buttigieg says that anyone would “be able to opt in to an affordable, comprehensive public alternative,” which will “incentivize private insurers to compete on price and bring down costs.” He further proposes to “prohibit health care providers from pricing irresponsibly by capping their out-of-network rates at twice what Medicare pays,” thus lowering health insurance premiums. He would also strengthen requirements that nonprofit hospitals document their “community benefit,” which often includes free care for the uninsured, in order to maintain their tax-exempt status; currently, non-profit hospitals game that system.

None of this is what Elizabeth Warren would call “big structural change.” It is squarely in the territory of fiddling at the margins. But according to Buttigieg, and others who propose similar plans, this kind of market-based tinkering will make a public option so cheap and so good that the insurance industry will simply collapse, creating a “glide path” to Medicare for All. Picking a metaphor that makes it sound like a smooth, natural transition is clever but dishonest; do you imagine the insurance industry making this an easy ride instead of, say, hijacking the plane with a gun? Buttigieg’s plan falls prey to the same mistake that all of the non-single-payer plans make: the belief that significant conflict with the various bad actors in the health care system can be avoided.

There is a reason American health spending is so much higher than other countries, and it’s not that America is Great, or that our health care is just that much better—on the whole, it’s worse. The cost of health care is high because the United States is the only country that includes—indeed, prizes—such a huge and profitable role for private actors in the health care industry. In order to ensure that everyone has good health care, a lot of these bad actors are going to have to make less money. Hospitals are going to have to make less money. Drug companies, too, are going to have to make less money—don’t fret, Pfizer had a profit of $5 billion just last quarter, enough to stash away for a rainy day. And the insurance industry, which provides nothing to the practice of health care itself but a middleman with an outstretched hand, must simply be turned into a shell of its former self; its billions and billions in profits, made on our backs, cannot be sustained.

The industries in question will not accept this. If we are going to have Medicare for All, it is going to be won through a long and bloody battle. Big, profitable, bloodthirsty companies have not historically been taken down by a bright-eyed Harvard Man with a Really Good Plan. They certainly won’t be taken down by one with a really bad plan.