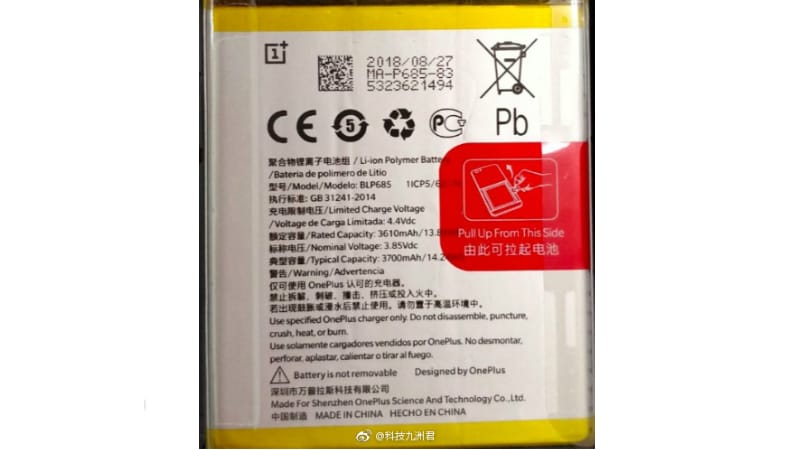 Leaks surrounding the OnePlus 6T device have been doing the rounds frequently these days, and now details about the battery capacity have surfaced. A new image leak suggests the OnePlus 6T battery capacity will be 3,700mAh, a considerable increase from the 3,300mAh battery seen on the OnePlus 6. Leaked renders suggest that the OnePlus 6T smartphone will sport a waterdrop-shaped notch, with minimal bezels on all sides. On the back, the smartphone is expected to sport a dual camera setup stacked vertically.

A Weibo user in a post claims the OnePlus 6T will pack a 3,700mAh battery, accompanied by a photo of the battery. The image shows the battery model number, capacity, and clearly mentions “Use specified OnePlus charger only.”

This is a significant increase from the 3,300mAh battery of the OnePlus 6, and the company has managed to integrate the bigger battery by removing the 3.5mm audio jack. Co-founder Carl Pei recently confirmed to TechRadar that the OnePlus 6T won’t have a 3.5mm audio jack, hinting indirectly at an increased battery. Though he never hinted of any such increase, but this leak seems to lend weight to the eventuality. While the 3,700mAh battery is a respectable increase, it still doesn’t match up to other flagships that sport a 4,000mAh battery, such as the Galaxy Note 9. The tipster claims that OnePlus is gearing up to launch the smartphone sometime next month.

The OnePlus 6T is also confirmed to sport an in-display fingerprint sensor, and will be one of the big highlights of the smartphone. Previous leaks suggest that the OnePlus 6T might sport a slightly larger 6.4-inch Optic AMOLED display panel with the same full-HD+ resolution. The dimensions of the OnePlus 6T are tipped to be at 157.5×75.7×8.2mm and the phone will be 8.6mm at its thickest point, on the camera bump. At its core, the OnePlus 6T is expected to get the same Qualcomm Snapdragon 845 SoC, coupled with 6GB/ 8GB of RAM and up to 256GB inbuilt storage.