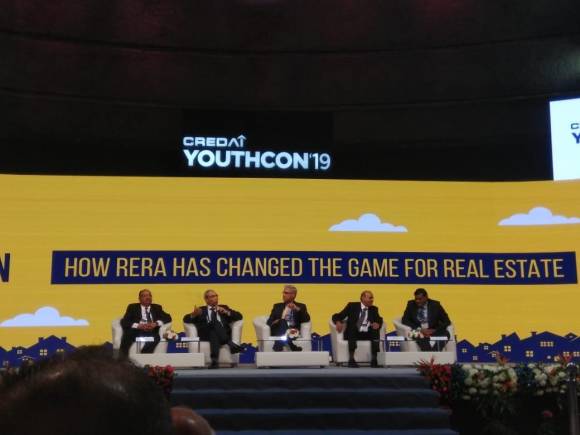 Concerned over the issue of forum shopping by some homebuyers, Maharashtra RERA chief Gautam Chatterjee has suggested that if NCLT decides to take up a real estate case that is a RERA registered project, it should first refer the matter to the respective real estate regulator before it decides to address the issue.

The main objective of RERA is to ensure that pending real estate projects are completed, remove the existing information asymmetry and bridge the trust deficit that exists between homebuyers and developers, he said addressing a seminar on How has RERA Changed the Game for Real Estate at Credai Youthcon 2019.

“Admitting of a case under NCLT means moratorium under section 14 which means for six to nine months nothing in the project will happen. If a project comes under IBC it means it has become insolvent. It may not go under liquidation but experience shows that wherever projects are resolved under IBC, they have been resolved with a haircut of 30 percent to 50 percent. Are we saying that homebuyers, also  creditors, go back home with a 50 percent haircut? RERA expects the house to be completed and given to the homebuyers,” he said.

Therefore, any matter that is being heard by RERA, if it goes to the NCLT and before NCLT decides to admit it, it should be referred to the concerned RERA, who should be given time to resolve it, he said.

“Without making any changes to the Act, the NCLT should be requested not to admit a RERA-registered case right away. It should first ask the concerned regulatory authority to give its opinion whether they are in a position to resolve the case or not. I am a regulator and should get a chance. If RERA is able to resolve the matter within three to four months ‘good’, if not then the NCLT can take it up,” said Chatterjee.

Commenting on the issue of forum shopping, Anthony De Sa, MP RERA chief was of the opinion that it is an established legal principle that for a legal resolution of any kind of dispute, there is one legal path prescribed because parallel paths can result in conflicting judgments and therefore confusion.

“RERA is well equipped to grant compensation for delay and also see that the project gets completed. Therefore, parallel forums should not be allowed,” he said.

KK Khandelwal, Haryana RERA chief, suggested that certain provisions need to be incorporated in the Act that would make the state agencies that are responsible for providing basic services, are also made answerable. “They should be declared as part promoters of the project,” he suggested.

“If state agencies are not doing their job, they should be penalized… if are examining such a proposal. Since EDC is deposited with state agencies and if they are declared as part promoters, they too can be hauled up,” he said.

In his speech, Housing and Urban Affairs minister Hardeep Puri was of the view that if in the implementation of RERA there were “genuine problems, these can be identified without changing the basic character of the new legislation, I think, we should take those on… Let’s realise that this is a new legislation and it has to co-exist with other legislations that have come into being. What supersedes, that is a question which only the passage of time and implementation will show,” he added.

At a meeting held in January this year, real estate regulators of different states, officials from the housing ministry, representatives from the developer community, had pushed for barring consumer forums from taking up disputes relating to real estate issues. They had also suggested that Rera authorities should be given the chance to resolve the dispute within six months before the insolvency proceedings are invoked against the concerned builder.

“Forum shopping does not mean blocking all other options for homebuyers except one, rather it refers to approaching more than one forum simultaneously. Even before RERA, homebuyers could approach the Competition Commission of India or a file civil suit for refund or go for specific performance or approach the criminal court besides the consumer court. Similarly, even now homebuyers should have the choice to approach either RERA or any other forum such as consumer forum (available in every district) or even the NCLT and it is necessary to understand that RERA has to co-exist with other laws,” said Abhay Upadhyay, president of Fight for RERA, an umbrella body of homebuyers.