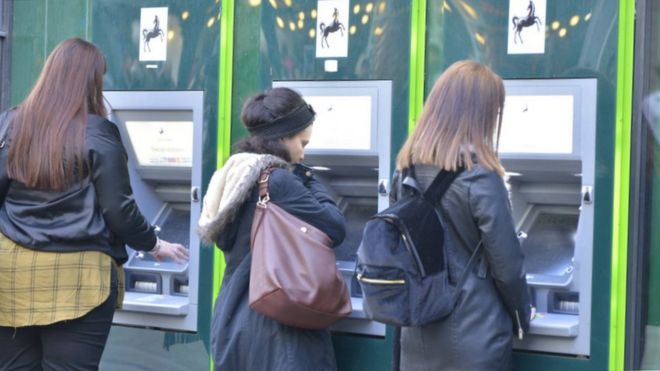 Millions of people who have basic bank accounts may be paying higher fees than necessary, government figures indicate.

Basic bank accounts are designed for people who do not already have a bank account and are ineligible for a standard current account.

While eight million people have basic accounts, around half of them are still liable to pay fees for failed payments.

Completely fee-free basic accounts have been available since January 2016, following an industry agreement.

Vulnerable customers who have such accounts are not charged for failed payments, or for going overdrawn.

The Treasury figures show that 3.7 million people have accounts that do not conform to the agreement, struck between the government and the banking industry, in 2014.

Of those, 3.6 million bank with Lloyds.

Only 4% of those who have basic bank accounts with Lloyds have access to the cheapest banking terms, the figures show.

Lloyds said that it wrote to all its basic account customers, giving them the option to move to one of the new accounts. However not all were eligible, it said.

“These figures are shocking, but sadly not surprising,” said Hannah Maundrell, editor in chief of Money.co.uk.

“Swift intervention is clearly necessary if banks can’t be trusted to treat their most financially vulnerable customers fairly.”

Royal Bank of Scotland (RBS) is the only other bank where some basic account customers have to pay fees.

At the other seven big High Street banks, all basic account holders receive the best deal on offer.

The agreement for fee-free basic banking was introduced after studies showed that up to 1.5 million people in the UK did not have bank accounts.

“Fee-free basic banking facilities should be made available to everyone not eligible for a standard current account,” said Ms Maundrell.

“It’s not right that banks are profiting from those in financial distress, and the regulator and government need to put a stop to this as a priority.”

However, the Treasury said that nearly half a million basic accounts had been opened in the first six months of 2016.

It said that would eat in to the number of people who previously had no bank account at all.

The economic secretary to the Treasury, Simon Kirby, said: “There is still more to be done, and I am determined to work with the industry to boost financial inclusion and make sure people have the resources they need to manage their finances.”

A third of all new basic accounts opened between January and June 2016 were at Lloyds.

“We believe that all banks have a responsibility to provide basic bank account facilities to customers who would be otherwise excluded, and today’s announcement highlights that the sector has a responsibility to do much more,” said a spokesperson for Lloyds.