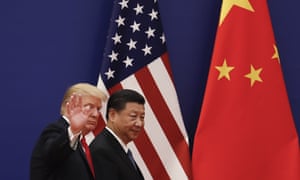 A thawing in the relationship between the US and China could give investors a reason to get back into Asian equities after a punishing year – the Hang Seng is still down by 11% in the year to date.

While we are still cautious over a full resolution of recent tensions in the medium term, resumption of dialogue between Washington and Beijing would be good enough to investors for now.

Combined with the prospects of more economic stimulus from China and reasonable valuations in Asian equities, investors could use this opportunity to reload on emerging market and Asia assets. The US dollar is still edging higher but Asia has been more resilient on handling greenback strength than other emerging markets.

The FTSE 100 has taken its cue from Asian trading at the open, bouncing by more than 1% in its first few minutes before retreating to a 0.8% gain.

The positive sentiment is spreading across Europe, with Italian shares up by 1.2%. Investors in Sweden, Poland and even Russia are having a good time.

Good morning, and welcome to our rolling coverage of the world economy, the financial markets, the eurozone and business.

US president Donald Trump has already fired up stock markets this morning after showing optimism on the trade relationship with China.

Trump spoke to his Chinese counterpart, Xi Jinping, appearing to give hope of progress at the G20 meetings at the end of this month.

Asian markets have risen across the board. The CSI 300 index, which tracks stocks in Shanghai and Shenzhen, rose by 3.56%, while the Hang Seng index in Hong Kong gained 3.79%.

However, investors are not quite popping the champagne corks just yet.

I’m not entirely sure what to make of this. But it feels too big a change of direction following the [vice president] Mike Pence speech some weeks ago to be taken literally. It certainly isn’t in synch with the latest charge of a Chinese company for conspiring to steal trade secrets.

Whether Trump has set the tone for the day will in large part depend on the outturn of US employment data, which is closely scrutinised by traders across the world for signs of inflationary pressure in the American economy.

The non-farm payrolls will be published at 12:30pm, with average hourly earnings and the unemployment rate the key data.

In the UK the Bank of England’s top officials are busy doing the media rounds to explain why they held back from raising interest rates – and warned they could go both ways in the event of a “no deal” Brexit.

Bank deputy governor Ben Broadbent today told the BBC that faster wage growth will help real household incomes – a welcome sign for Britons after one of the worst decades for wage growth in the last century.

In Europe, meanwhile, investors will be eagerly awaiting the results of the European Banking Authority’s latest stress tests of the banking sector, to be published at 5pm in London, where the watchdog is based (for now).

Some 48 banks have been put under the microscope, with the regulator looking at how risky the assets held by the lenders are – and how they would withstand a shock.

Italian banks’ results will be particularly scrutinised amid political uncertainty over the prospects for the country’s public finances.