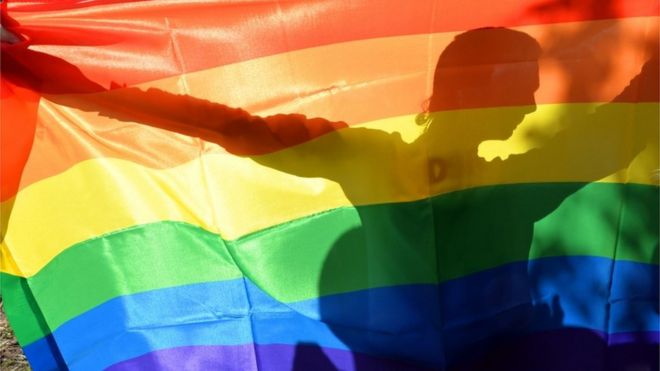 Lesbian, gay, bisexual and transgender (LGBT) pupils are still experiencing high rates of bullying in schools, according to campaigners.

LGBT Youth Scotland said the pupils were also not confident about reporting abuse to staff.

The charity called for strong leadership from schools and local authorities on the bullying.

The Scottish government said a new anti-bullying strategy had been developed with LGBT organisations.

Homophobic, biphobic and transphobic bullying at school can have a devastating impact on young people’s mental health and cause them to leave education early, according to the charity’s research.

LGBT Youth Scotland said its study went on to show transgender youngsters have a particularly difficult time at school and face even higher levels of bullying than their LGB peers.

The organisation has teamed up with the Time for Inclusive Education campaign to highlight the issue and demand further action. It coincides with anti-bullying week.

The charity said there was good work being carried out, but demanded more guidance and resources for teachers, as well as improved regulation and inspection of schools over the bullying of LGBT pupils.

She said: “I had to move school because they wouldn’t deal with bullying at all. Once I moved, my new school wasn’t much better.

“As a result, my attendance dropped as I didn’t want to be there. I wasn’t in a good place.”

Fergus McMillan, the charity’s chief executive, said: “We want to see an education where lesbian, gay, bisexual and transgender young people report feeling included in their school, have their lives reflected in the curriculum and are free from homophobic, biphobic and transphobic bullying.

“We, therefore, support the principles of the Time for Inclusive Education campaign and call on school leadership and policymakers at all levels to focus on fully implementing the Equality Act (2010) to eliminate discrimination and promote equality of opportunity for all.”

The Scottish government said all bullying, including prejudice-based bullying, was “unacceptable”.

A spokeswoman added: “Respect for All, the refreshed national anti-bullying strategy for children and young people, which has been developed in collaboration with organisations including LGBT Youth Scotland and Stonewall Scotland, will take a holistic approach to tackling this issue.

“Last week, Deputy First Minister John Swinney wrote to the Scottish Parliament’s Equalities and Human Rights Committee to welcome their input into the process and agreed to put the publication on hold to allow for meaningful engagement.

“We have also committed to a programme of teacher education on equality for all… providing funding where necessary and have updated relationship teaching guidance.”