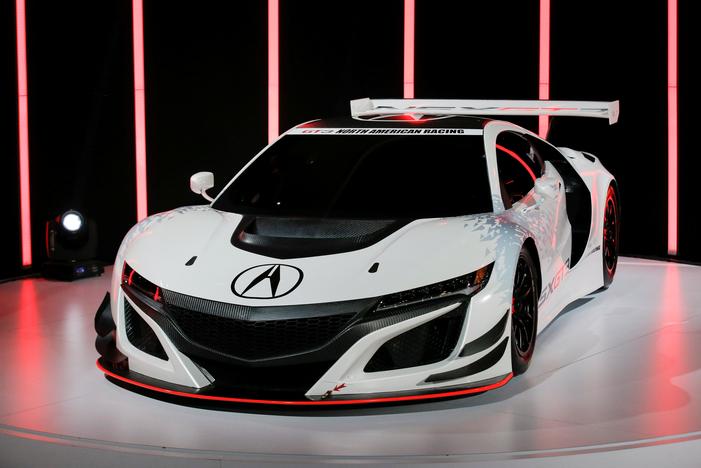 With its aggressive design and six-figure price tag, Honda Motor Co’s revamped NSX is a far cry from its “cheap and cheerful” Civic sedans, but the automaker is betting the car will return some spark to its brand image and product line-up.

The new NSX, jointly developed by Honda’s U.S. and Japanese engineers and produced in the United States, marks the revival of the model after the automaker stopped production of the “Asian Ferrari” in 2005. First launched in the 1990s, the model redefined the supercar genre by marrying a high-performance sportscar with everyday driveability.

Starting at 23.7 million yen (£178,357), the bespoke hybrid model becomes available to order in Japan on Thursday, having launched in the United States earlier this year. It will also be sold in Canada, China, Europe and other regions.

Marketed under the Acura badge, Honda’s stalled premium brand in the United States, China and other regions, the NSX marks the latest effort by the Japanese automaker to reclaim its reputation as a leader in innovation and engineering after a spell of sluggish sales due in part to “play-it-safe” designs.

“We’ve really woken up and realised that Honda has to make a Honda product. A Honda product … can’t just be a mental or physical thing, it has to be emotional,” executive engineer and NSX project co-leader Ted Klaus said.

Honda beefed up the model with a hybrid powertrain consisting of three electric motors and a twin-turbo V-6 engine approaching the power of a Ferrari.

Encased in an aluminium body and a space frame consisting of aluminium, ultra-high strength steel and other lightweight materials, Klaus said the NSX marked a turnaround in the company’s engineering direction, which had begun to “narrow”.

Analysts said its advanced engineering and technology would help to improve Honda’s brand.

“Once upon a time ‘Honda’ was synonymous with ‘performance’. Now Honda is known for reliability, for sensibility,” CLSA analyst Chris Richter said.

“(The new NSX) is an attempt to redefine Honda and regain some of the excitement about driving.”

Just five of the sportscars are produced each day at a specialised manufacturing plant in Ohio.

Honda has initial plans to produce only about 800 of the cars for North America in the first year of production, and about 100 for Japan.

The automaker has been revamping its existing line-up to win back combined market share for Honda and Acura in North America, which has slipped below 10 percent in the past few years. North America is a key market for the automaker, accounting for more than one-third of global vehicle sales.