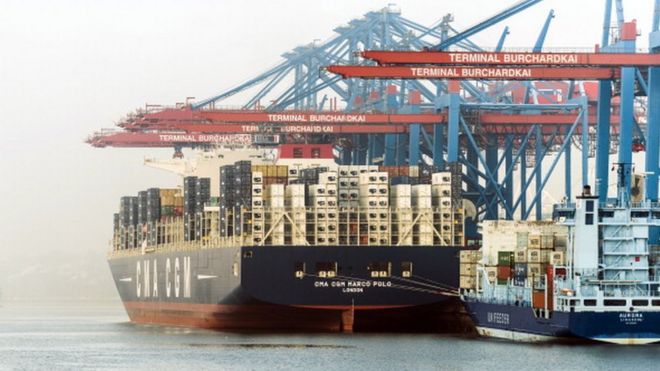 Seasonally adjusted exports fell 2.6% compared with the month before, the biggest monthly drop since August 2015.

The figures from Destatis followed economic data that painted a gloomy picture for German manufacturing.

Industrial orders barely rose in July and output fell the most in nearly two years.

Germany’s economy is powered by its historically strong trade with other countries, and despite the slowdown the country still posted a €19.4bn trade surplus in July.

Demand for goods from Europe’s biggest economy dropped the most from countries outside the EU.

Exports to so-called “third countries”, which include China, Russia, Japan and the US, fell by 13.8% compared with July 2015.

German exports to EU countries outside the eurozone, which includes Britain, dropped by 8.8%.

“The month of July was clearly not a good month for Germany,” ING economist Carsten Brzeski said, adding that the surprisingly weak trade figures added to growth concerns.

“A further cooling of the economy in the months ahead should give more support to just-started discussions about fiscal stimulus,” Mr Brzeski said.

“However, exports certainly won’t be the driver of the German economy in the coming months,” Mr Solveen said. “There is the sluggish global economy and the effects from the weaker euro are also fading.”

Imports fell by a seasonally adjusted 0.7% in July compared with the previous month.