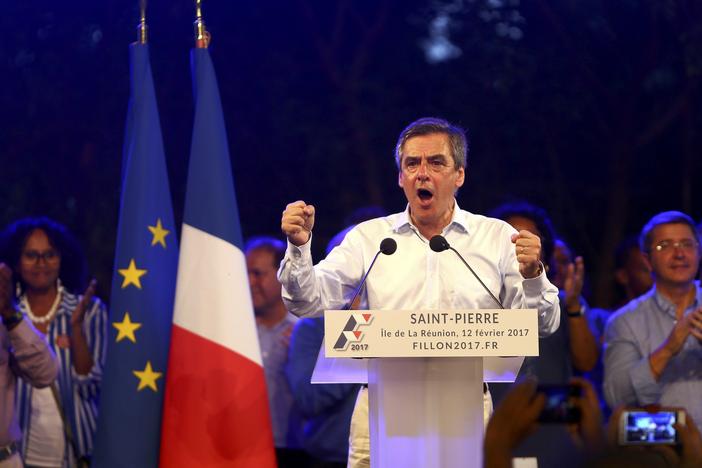 Francois Fillon faced down a rebellion by lawmakers in his centre-right party on Tuesday, but the revolt exposed a shaky confidence inside his camp as he tries to draw a line under a scandal that could derail his bid to win power.

With Fillon’s election campaign once again distracted by the fallout from allegations surrounding taxpayer money he paid his wife as a salary, opinion polls show the former prime minister’s difficulties paving the way for a May 7 runoff between the far-right’s Marine Le Pen and centrist Emmanuel Macron.

Voter surveys have painted the same picture for three weeks, when the scandal erupted, and there is disquiet within Fillon’s party over whether he can turn around his slump in popularity. Fillon has said he will only step down if he is put under formal investigation.

Fillon’s attempts to rally his party, The Republicans, was dealt a blow by a report at the weekend which suggested the country’s financial prosecutor was likely to take further legal steps into allegations of fake work by his wife, Penelope.

On Monday evening dissenting lawmakers publicly dined at a central Paris restaurant to discuss whether their candidate was best-suited to represent them.

“On Feb. 1st … you asked us to hold on 15 more days on the basis that the situation would be clarified favourably,” said an open letter agreed by some 40 lawmakers.

“However, this period has expired, and there has yet to be any clarification. As a result, we have a real concern that our political family, The Republicans, will not be able to compete in this presidential election in a calm and dignified way.”

Later though, during a weekly meeting between Fillon and conservative lawmakers, Georges Fenech, who instigated the letter, backed down on the demand to convene the party’s political bureau.

During the meeting, Fillon stood his ground, saying that his withdrawal would lead to the implosion of the party.

“It is me that knows best that the campaign is difficult because it’s me getting smacked in the face by it every moment,” he told his party lawmakers.

“I’m hounded by the national press. I’m hounded by the judiciary. I wouldn’t want to be hounded by lawmakers as well because that would make it difficult … I have established there is no alternative better solution and that the withdrawal of my candidacy today would create a major crisis.”

His spokesman Thierry Solere said Fillon had received unanimous backing at the meeting.

His support among voters, however, has been hurt. Opinion polls, which before the affair saw Fillon as favourite to win the presidency, now show the 62-year-old running a close third in the first round vote on April 23.

An Opinionway survey on Tuesday showed the National Front’s Le Pen winning 27 percent of the vote in the first round ahead of Macron on 22 percent and Fillon on 20 percent.

Both Macron and Fillon would comfortably beat Le Pen in the May 7 second round, the poll indicated. However, support for Fillon in a head-to-head against Le Pen has dropped since the scandal broke.

Only 59 percent back him in a contest against the far right candidate who would take France out the euro currency, compared to Macron’s 64 percent, according to the Opinionway poll.

In an editorial published on Tuesday, Le Monde newspaper said Fillon’s troubles, divisions on the left and Macron’s perceived lack of a detailed programme were opening a “boulevard” for Le Pen.