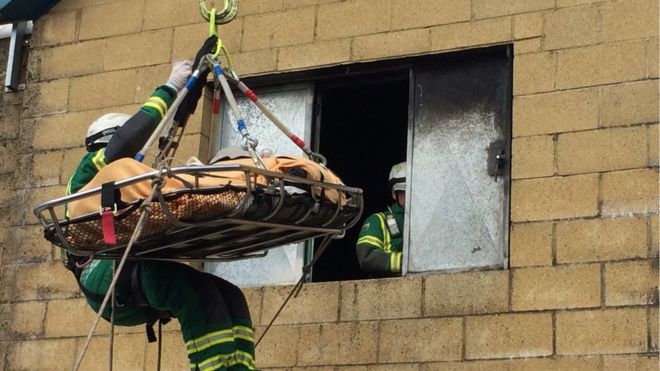 The number of obese people being rescued by the fire service because they are too large to move on their own has gone up by more than a third over the past three years.

Figures obtained by BBC Radio 5 live show there were more than 900 incidents in the UK in the past year.

In 2012, a new category was created for the fire and rescue services to report incidents involving obese patients.

‘Bariatric’ rescues – which involve coming to the aid of severely obese people, who are often stuck in their homes – have increased in number every year since.

The cases recorded included helping the ambulance service with lifting equipment to remove an “extremely large” patient who had been stuck on the sofa for days and carrying a 40-stone man from the upstairs of a pub.

A number of incidents involved helping with the removal of a deceased obese person from their home to an undertaker’s ambulance.

Fire services with the highest number of bariatric rescues 2015-16

He said said some of the rescues were very complicated.

“Some of these incidents have become protracted overnight while we’ve needed to change certain elements to the building to make that rescue safe before we can bring the patient out.

“If we are doing what we call an external rescue where we’re taking the patient out through a window, quite commonly we’ll remove the window frame itself and we will actually sometimes drop courses of brickwork down to create that space.

“Internally we might have to take doors off, move furniture, we may even have to put supporting systems into the house to make sure everything’s structurally sound as well.”

Greg Lloyd, head of clinical operations at the Welsh Ambulance Service, said they worked closely with the fire service as well as with primary care teams.

“We speak to GPs and community-based teams to see if we can provide that care closer to home without patients having to go to hospital.

“The fact of the matter is with this type of rescue we might not be able to get patients to hospital as quickly as we’d like.”

Compared to the total number of rescues carried out by fire and rescue services in the UK, bariatric rescues were still a small proportion.

In Scotland, for example, there were 33 bariatric rescues in 2014-15 out of more than 10,000 special service call-outs, which are all non-fire related.

‘Scared to be seen’

Tam Fry, from the charity National Obesity Forum, told BBC Radio 5 live that the figures are on the increase because the obese are getting bigger.

He said: “This is not about more people being obese. This is about those who are already obese now getting to a size where they now need assistance.”

Mr Fry said the figure could be a lot higher.

“Senior doctors I speak to say there are many people who don’t leave their homes so they don’t even put themselves in a position where they may need to be rescued.

“They are scared of being seen in public.”