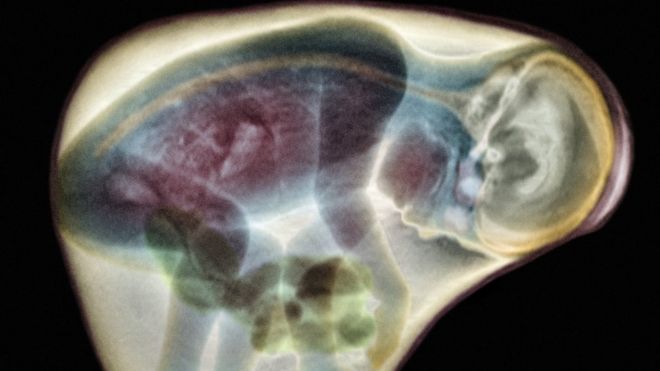 Detailed MRI scans should be offered to some women in pregnancy to help spot brain defects in the developing baby, say researchers.

Ultrasounds are already used to look inside the womb and check that the baby is growing properly.

However, the study on 570 women published in the Lancet showed doctors were able to make a much better diagnosis using MRI scans.

Experts called for the scans to become routine practice.

Pregnant women are offered an ultrasound scan at about 20 weeks that can spot abnormalities in the brain.

They are detected in three in every 1,000 pregnancies.

If the brain fails to develop properly it can result in miscarriage or still birth. Couples are generally offered counselling and some choose to have an abortion

The study, carried out across 16 centres in the UK, analysed the impact of using MRI scans – which use magnetic fields and radio waves to image the body – to confirm any diagnoses.

Overall, it showed ultrasound gave the correct diagnosis 68% of the time.

But combining that with MRI increased the accuracy to 93%.

The extra tests were most useful in borderline cases where doctors were uncertain of the outcome.

The number of pregnant women who were given an “unknown” diagnosis was more than halved by the extra scans, increasing the confidence that the developing baby’s brain was healthy or not.

Prof Paul Griffiths, from the University of Sheffield, said: “Based on our findings, we propose that an MRI scan should be given in any pregnancy where the foetus may have a suspect brain abnormality.”

About 95% of mothers-to-be said the scan was helpful and would have it again if there were concerns on the ultrasound.

The number of abortions increased from 25% with just the ultrasound to make the decision to 36% with the extra scan.

Dr Cara Mooney, one of the researchers at the University of Sheffield, told the BBC News website: “There may be some people who think it’s controversial, but this is really about informing pregnant women and their families to ensure they have the correct information when they’re going through what can be a traumatic time.”

Commenting on the findings, Prof Rod Scott, from the University of Vermont, said: “Accurate diagnosis of significant brain abnormalities has important implications.

“This trial strongly supports the view that in utero MRI is an excellent technique and it should be incorporated into clinical practice as soon as possible.”