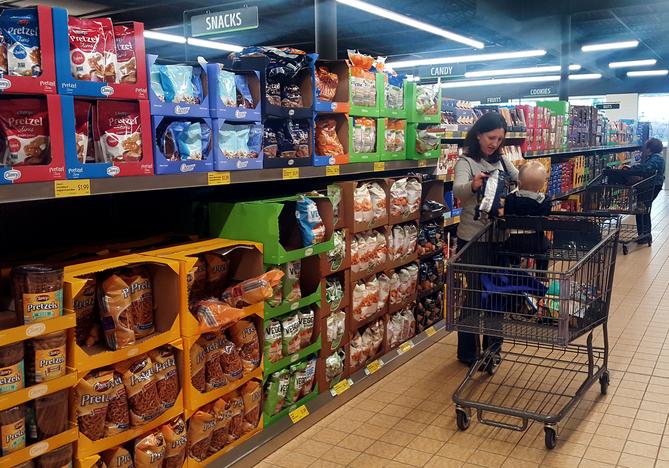 German grocery chain Aldi Inc is trying to beat the world’s biggest retailer at its own game: low prices.

His strategy, previously unreported, centers on adding more private-label goods, which are a retailer’s in-house brands, to win over price-sensitive customers, and a massive expansion to further disrupt a U.S. grocery sector that has seen 18 companies go bankrupt since 2014.

Hart’s plan calls for spending $1.6 billion to expand and remodel 1,300 U.S. stores, and open 400 new stores mainly in Florida, Texas and on both coasts by end of 2018. He also pledged Aldi will be willing to change prices more frequently to respond to rivals if needed.

“We are re-merchandising, remodeling, enhancing our product range and are focused on gaining volume so more customers start their shopping at Aldi and we are able to complete their shopping lists moreso than we have in the past,” said Hart, who added Aldi’s U.S. sales have doubled in five years.

Though it only accounts for only about 1.5 percent of the U.S. grocery market, Aldi is growing at 15 percent a year, whereas Wal-Mart currently controls about 22 percent of the market and its U.S. sales are estimated to grow about 2 percent this year, according to analysts.

Aldi’s growth potential has competitors taking notice. Reuters reported in February that Wal-Mart is running price tests in 11 states, pushing vendors to undercut Aldi and other rivals by 15 percent and is expected to spend about $6 billion to regain its title as the low-price leader.

Price wars are roiling the entire retail sector – from department stores to discount chains – but it is nowhere as intense as in the grocery sector. Beyond Wal-Mart’s move to match Aldi on price, German discount chain Lidl plans to open up to a 100 U.S. stores in a year, and Amazon.com Inc is aggressively testing out various brick-and-mortar grocery formats along with growing Amazon Fresh, its grocery delivery service.”We have not seen anything like this in the grocery sector in the United States before,” said Scott Mushkin, managing director of Wolfe Research and a leading pricing analyst.

Such heated competition risks a dangerous race to the bottom that could result in more retailers shutting their doors.

“Given Aldi’s expansion, Lidl’s entry, Wal-Mart’s response and Amazon’s growing ambitions in this space, it is fair to expect a significant acceleration in the bankruptcy and liquidation cycle in this sector over the next few years,” said Burt Flickinger, managing director at retail consultancy Strategic Resource Group. For more on Wal-Mart’s stock performance vs Amazon, click [L1N1IC270]

“We don’t confuse our customers with yo-yo discounts, sales, coupons and loyalty cards that require membership fees,” he said.

Four analysts and consultants contacted by Reuters confirmed Aldi now offers the lowest prices in private label consumer products in the states it operates, although they did say Wal-Mart is gaining ground in the states they are conducting price tests.

Hart said Aldi’s internal studies show its prices are 21 percent lower than its lowest-priced rivals and the discount retailer intends to keep the advantage at least that strong going forward.

Depending on the product, Aldi’s prices are cheaper than most rivals’ private label items and even most branded items, analysts said. Hart said the 21 percent difference in price is calculated by monitoring competition on a basket of groceries.

Aldi counts on its no-frills shopping experience to help keep costs low, and limits much of its inventory to items that sell in huge volume. But its focus on offering far more private label items than branded products is central to allowing Aldi to adjust pricing whenever it chooses, Hart said.

That different product mix can potentially make it more difficult for Wal-Mart to adjust prices because it often first needs buy-in from suppliers, and many times faces push back from packaged goods makers like Procter & Gamble, Unilever and even smaller brands. Such vendors fear steep discounting can erode the value of their brands, analysts said.

A Wal-Mart spokesman declined comment saying the company would not comment on a competitor’s strategy. P&G and Unilever did not respond to Reuters requests seeking comment.

But the explosive growth in private label products is on the radar of Wal-Mart Chief Executive Doug McMillon. Last month he told analysts that private label goods will play an even more important role as the widespread availability of branded products online will compress those products margins over time.

“Aldi is disrupting the sector the way Wal-Mart did when they started,” said Strategic Resource Group’s Flickinger.

STEPPING UP THE GAME Aldi’s aggressive push to remodel its stores will allow it to add new private label merchandise in rapidly growing categories like fresh food.

“The remodels are aimed at increasing our volumes which means more purchasing power that will help us lower prices further,” said Scott Patton, Aldi’s vice president of corporate buying. At a recent visit to an Aldi store in Wheaton, Illinois Reuters found newer-looking shelves, wider aisles and brighter lighting than a typical Aldi store. There was also a bigger assortment of fresh, organic, gluten-free products and antibiotic-free meats versus what it stocked earlier – categories Aldi said is growing the most rapidly at its stores.

For example, its Simply Nature range of private-label products grew 53 percent to $300 million in 2016 from a year ago.

Aldi has also opened stores close to Wal-Mart’s supercenters to benefit from its budget-conscious shoppers. Its total store count of 2,000 stores by the end of next year will be about 42 percent of Wal-Mart’s U.S. store base.