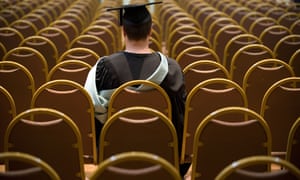 An education minister has attacked his own government’s policies of expanding access to higher education, saying it is “lunacy” and “madness” to allow students with low A-level grades into university.

Theodore Agnew, the Conservative minister for schools in the House of Lords, told a private schools’ conference: “Why are we letting kids go to university with three Es at A-level? Why? It’s a lunacy.

“But unfortunately there’s a body of people out there, because they then never have to pick up the tab for the results of that kind of madness, that’s the problem.

“And so, as a government you just have to suck it up basically and just keep plodding forward.”

At the conference of independent school headteachers in Brighton, Agnew said he did not agree with medical schools lowering their admissions requirements in order to train more doctors.

Agnew’s comments came a day after the education secretary, Damian Hinds, endorsed a proposal by the higher education regulator in England for universities to make greater use of “contextual offers”, which adjust entry requirements for applicants from disadvantaged backgrounds.

“We know that contextual offers can play an important part in levelling the playing field so those from disadvantaged backgrounds can flourish in higher education,” Hinds said in response to a report by the Office for Studentscalling for universities to improve access.

Based on figures from the Higher Education Statistics Agency (HESA), fewer than 10,000 of the 1.3 million-plus UK undergraduates studying for first degrees were admitted to universities with A-level grades of E and lower in 2017. The figures include mature students, entering higher education after the age of 21.

The minister’s remarks come as the government considers publication of the Augar report into tertiary education, which is expected to cut undergraduate tuition fees in England to £7,500 or less. The report’s authors are said to have considered placing a bar on students with A-level grades below a D being eligible for government-backed students loans.

Earlier, Agnew complained that state school teachers had failed to show gratitude for the government increasing their pension contributions. “They don’t say, how wonderful,” Agnew told the conference.

The education minister, whose title is under-secretary of state for the schools system, also lavished praise on Britain’s independent schools, calling them “unique, indeed the envy of the world”.

Agnew, who was elevated to the peerage Baron Agnew of Oulton in 2017, is a multimillionaire businessman who has previously donated about £150,000 to the Conservative party. In 2015, he was knighted for services to education having founded the Inspiration Trust chain of academies in Norfolk.

Agnew himself was educated at fee-paying Rugby school, and made millions from the sale of his insurance claims management firm to an outsourcing company.

Agnew’s role in government includes overseeing academies and the conversion of maintained schools into academy status.

Agnew’s previous gaffes include betting any headteacher a bottle of champagne that he could find “waste” in their school budgets. It later emerged that Department for Education (DfE) consultants backed by Agnew had recommended schools cut lunch portion sizes to save money and take a share of charity fundraising done by pupils.