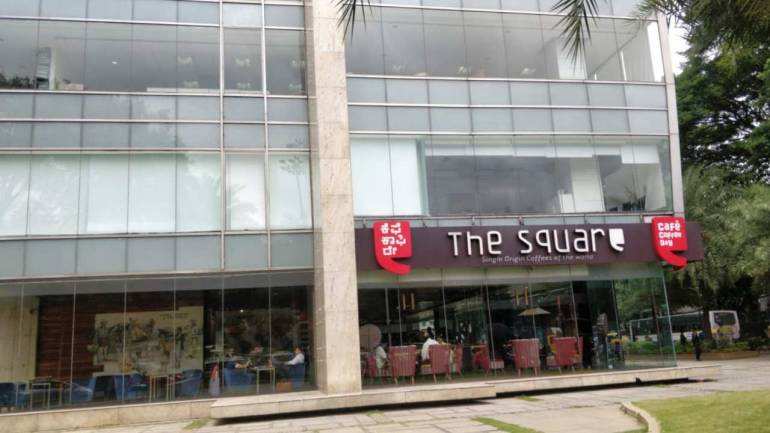 It looked like a usual day for those visiting the Café Coffee Day (CCD) outlet at Vittal Mallya Road, near Cubbon Park in Bengaluru.

People were either engrossed in discussions or busy on their laptops. After all, The Square is one of the most preferred places for meetings and conferences. It has a huddle room which is recommended for meetings as it is a completely wi-fi enabled conference room.

Located in the heart of Bengaluru, The Square is vibrant with bold colours and low seating with low tables. The upholstery on the chairs of different colours ranging from blue, black and brown makes the place youthful and lively.

Customers often appreciate the decor and interiors along with the coffee, food and service at The Square.

The service, often regarded as polite and generous, looked the same today and they were serving the customers with a smile.

But then, was there a hint of tension in the air?

There indeed was, as on the morning of July 30, people woke up to the news that CCD founder VG Siddhartha went missing the previous evening.

But the staff at The Square remained calm and continued with their usual work. It looked like they are trying to follow what VG Siddhartha, CCD founder, said in his recent letter to employees: requesting everyone to be strong and continue running the businesses.

The management, in a recent statement to Bombay Stock Exchange (BSE), also said that CCD will continue its business as usual.

However, the security around the outlet was tightened. No camerapersons are being allowed inside the café.

The staff is declining to answer any questions regarding VG Siddhartha.

“We have no clue regarding the issue and none of us are in a position to talk about it. No one here (The Square) can help with any kind of information regarding the missing case,” said a staff member at the cafe.

All employees remained tight-lipped about the disappearance of Siddhartha.

Same was the scenario at their corporate office, located right behind The Square outlet at Vittal Mallya Road. Efforts of meeting officials remained unfruitful as they are not in a position to meet any mediapersons, said a person in the office.

“In fact, all meetings for the day have been cancelled due to no clarity about what happened last evening with Siddhartha,” the person said.

Police officials had visited the outlet around 10:30 in the morning to talk to the employees at The Square.

But it is not CCD alone that is seeing an impact of Siddhartha’s sudden disappearance. Way2Wealth’s office in Vittal Mallya road had shut their gates.

Siddhartha is the founding chairman of Way2Wealth, which was brought under CCD’s group of companies in 2000. It is an investment consulting firm which caters to financial needs of retail as well as institutional customers.

A visit to another CCD outlet at Lavelle road showed that the news has not impacted all employees yet; many remain clueless.

However, things are worse at the Café Coffee Day factory in Chikkamagaluru in Karnataka as the gates remained closed.

Rumours say workers were asked to leave and a holiday was declared at the factory.

It is from the Chikmagalur factory that Siddhartha grew and exported about 28,000 tonnes of coffee annually, say reports.

In fact, Siddhartha was born in Chikkamagaluru district in Karnataka state to a family of coffee planters.

But with Siddhartha missing, the workers are tensed and one even broke down in tears in front of the camera of a news channel, praying that Siddhartha is found soon.

As there remains no clarity about Siddhartha’s whereabouts, staff at CCD outlets in other cities are also not commenting on the same.

The staff at the Café Coffee Day outlet inside the premises of the Peninsula Corporate Park in Mumbai categorically refused to speak about the matter.

They said they had received instructions in the morning to refrain from any interaction on the subject.

Managers at other outlets in the city also had a similar reaction.

At another outlet of the coffee house chain in Worli, the manager looked alarmed when the name VG Siddhartha was mentioned, immediately stepping back and refusing to respond any further.

It appeared that following news reports of VG Siddhartha having gone missing in the morning, the staff at various outlets were instructed to avoid speaking about the matter.

They were also asked not to allow interactions over the matter with customers inside the premises.

But a word with few customers brought to light what the sentiment is amid the people regarding the missing of VG Siddhartha.

“I was scrolling through my mobile notifications this morning when I saw the news of the CCD founder having gone missing,” said Pooja Mishra, a customer at the Worli outlet. “I feel it is another one of those scams, where these people run away, disappear or fake their death when they owe money. Remember that Bitcoin guy, feels like something of that sort,” she added.

The next few hours are crucial for the company and its employees. The search operation at Netravati river in Mangaluru is still going on and will continue through the night.

Reports say around 200 people are involved in the search operation. However, there is no update so far.