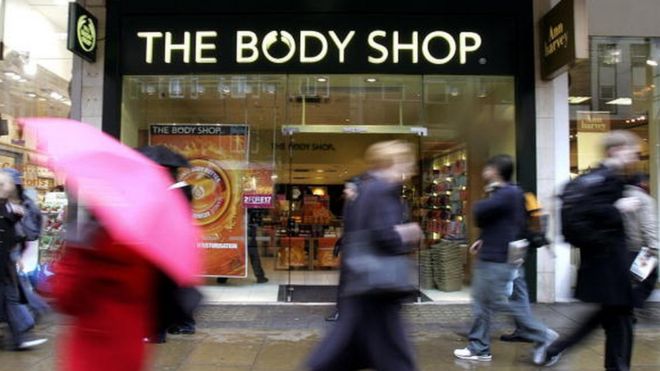 The Body Shop was established in the UK in 1976 by the late Dame Anita Roddick.

She and her company pioneered the manufacturing and selling of cosmetics that have not been tested on animals and which use natural ingredients.

The Body Shop is now one of the world’s biggest cosmetics chains with 3,000 stores in 66 countries

L’Oreal bought the business for around 940m euros in 2006 at the height of its success but it has failed to thrive since.

For its part, Natura is Brazil’s top business in cosmetics, perfumes and toiletries.

It sells products in seven Latin American countries as well as in France.

Echoing the ethical stance of The Body Shop, Natura says its aim is to “improve the environment and society”.

The proposed deal with L’Oreal was first unveiled earlier this month.

At the time, the L’Oreal chairman and chief executive, Jean-Paul Agon said Natura was “the best new owner we could imagine to nurture the brand DNA around naturality and ethics”.

The deal still needs to be approved by the Brazilian and US regulatory authorities.

Selling cosmetics in Brazil is a tough business: the country is huge, consumers are demanding and often live in very remote areas, and competition is cut-throat.

But it pays off, as it makes up the fourth largest cosmetics market in the world.

Natura is the local leader but now it wants to become global.

In 2013 it started to branch out, when it bought the Australian group Aesop.

Now with the acquisition of The Body Shop, Natura will try to test its local expertise at a global level.

Can it compete in a market with the likes of P&G, L’Oreal, Unilever and Avon outside its home turf?