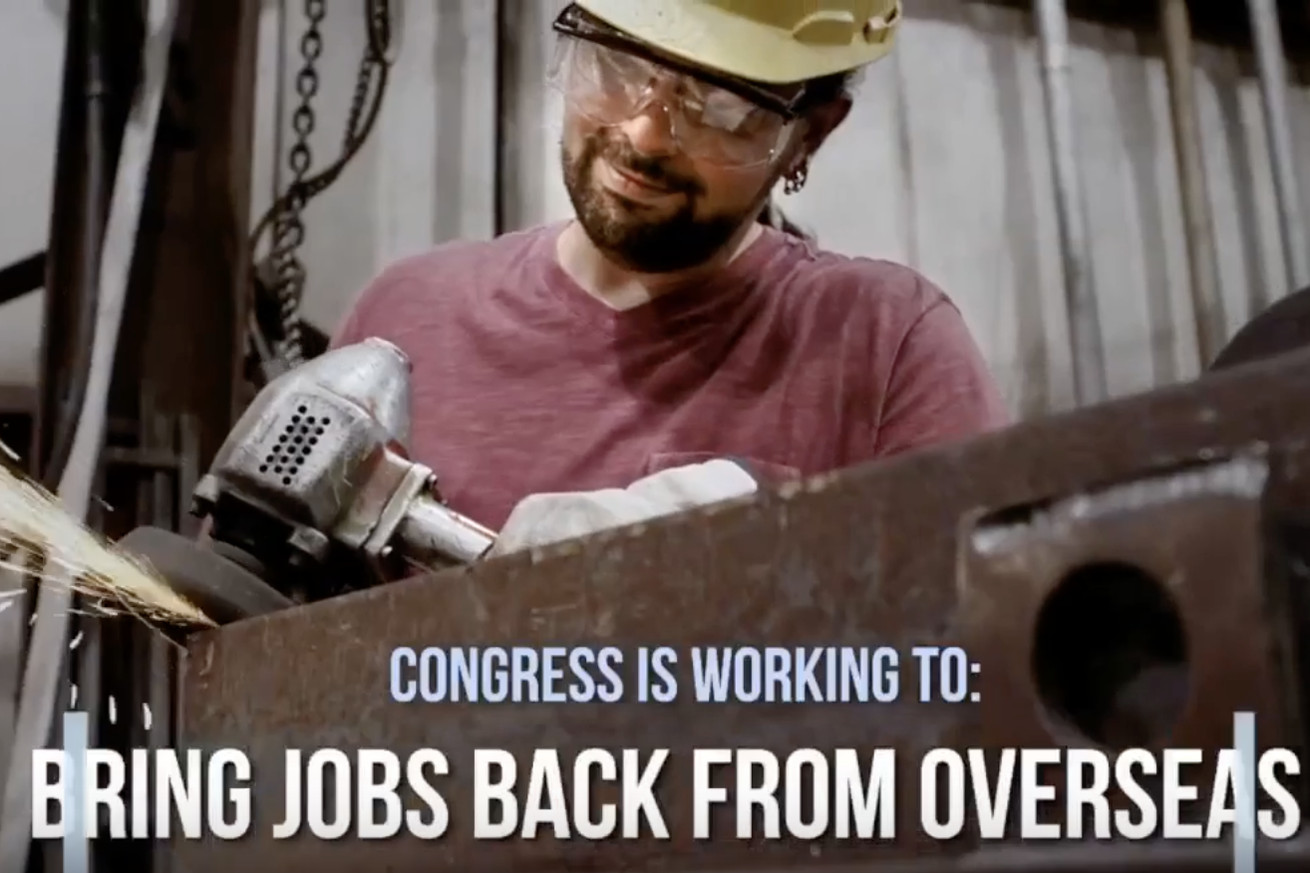 The business community is snagging a trick from President Donald Trump’s campaign, in hopes of selling big tax cuts for business and the rich to a very skeptical public.

Many wealthy business executives, including Trump, would like to see Congress enact a large tax cut on high-income individuals and on large corporations. One big advantage they have in pursuit of that quest is that Republicans currently control both houses of Congress, and most congressional Republicans are strongly predisposed to favor tax cuts for high-income individuals and corporations. One disadvantage they have is that these priorities are hideously unpopular with the public, which strongly believes that corporate taxes and taxes on the rich should be higher.

The unpopularity of this agenda is why Trump, when running for president, emphasized an entirely different agenda — bringing back good-paying manufacturing jobs by getting tough on corporate outsourcing.

Two new ads, one from the Business Roundtable group of CEOs and one from the right-wing ad shop American Action Network, attempt to square this circle by simply pretending that the GOP tax concepts floating around Congress are about combatting outsourcing. This is not in any way true, but in the era of the Bullshitter in chief in the White House it’s natural that the flim-flam style of argumentation would come to increasingly dominate the entire conservative firmament.

The less egregious ad, from Business Roundtable, does mostly stay focused on the general idea that low tax rates are good and will in some unspecified way generate more economic growth. But they throw in there the notion that “American companies are disappearing along with good-paying jobs,” linking the tax issue to outsourcing worries.

Text accompanying the ad further draws this notion out, by arguing that “we need a plan to make America competitive again” as if high tax rates are somehow causing US-based production to lose ground to foreign-based production.

The much more dishonest ad from the American Action Network is more emotionally effective since it entirely throws caution to the wind — focusing on a steelworker who lost his job due to competition from foreign steel and then just hand-waving about corporate taxes.

Obviously many Americans have lost jobs over the years and often subsequently struggle to get new jobs that pay as well as their old ones. But corporate income tax is a tax companies pay on their profits. If your employer is paying any corporate income tax at all, they are making money. If your employer is being driven out of business by the Chinese, they are not making profits or paying taxes on them.

Corporate tax rates have nothing to do with outsourcing

Consider a company like Apple which, unlike a bankrupt steel mill, actually does pay a lot of corporate income tax. The reason that Apple, despite its well-known taste for corporate tax shenanigans, pays a lot of money to the Treasury each year is that Apple is a staggering profit machine.

But note that Apple rather famously doesn’t manufacture much of anything in the United States. All those iPhones and iPads and the vast majority of the Macs and accessories that fuel those profits are made in China. And Apple makes them in China because Apple’s corporate leadership has decided that all things considered they will make more money that way. Apple is an American company that pays taxes to the American government on its profits and it would no doubt enjoy a tax cut — but a tax cut isn’t going to change the calculus that the most profitable place to build an iPhone is China.

What a tax cut for Apple would really do is something quite different.

One thing that Apple and several other highly profitable multinational companies, especially in the high-tech sector, have managed to do over the years is stash a huge amount of cash “overseas.” This means that accrued profits are formally on the books of subsidiaries that are legally domiciled in low-tax foreign countries. That money is still Apple’s (or Google’s or Facebook’s or Microsoft’s) but in order to pay it out to shareholders as dividends, it would need to be passed up to the parent company at which point Uncle Sam would demand his cut.

A reduction in tax rates would make it easier to do those payouts — creating big gains for people who happen to own a lot of stock, but no impact on outsourcing or domestic steel production unless rich shareholders happen to decide to spend their windfall gains on American steel. (Perhaps sales of the expensive but well regarded Baking Steel Griddle will surge).

What the tax debate is about

A more honest accounting of the case for a corporate tax cut would go like this.

The corporate income tax is, in the grand scheme of things, a kind of tax on capital and business investment. Many people believe — with some support from economic theory and well-known models — that taxes of this sort are harmful to long-term economic growth. With lower taxes on investment income, there will be more investment. And more investment will, in the long run, create a large stock of capital goods and thus more jobs and higher wages for everyone.

The best empirical research on recent tax changes tends to contradict this line of reasoning but it’s certainly a subject about which well-qualified economists disagree.

That said, one subject on which there is very broad agreement is that corporate profits are currently quite high.

One could take this as a sign of economic strength or as a sign of plutocracy run amok, but either way it’s difficult to take it as a sign that corporations being insufficiently profitable is what’s currently holding back economic growth. Either way, the loss of jobs due to foreign competition has nothing whatsoever to do with it.