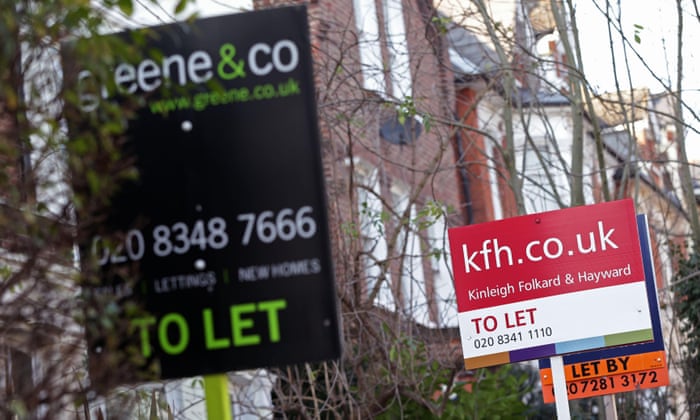 Average UK rents have fallen for the first time in more than seven years, with London seeing the biggest decline, according to new data.

The slowdown in the rental sector mirrors a similar picture in the housing market, with figures showing that property prices have fallen for the third month in a row.

The average monthly rent on a new tenancy that started in May was £901, which was down 0.3% on the May 2016 figure of £904, according to the latest rental index from HomeLet, which provides services to landlords and letting agents. It is the first such fall recorded by the company since December 2009.

However, the typical new rent in London has fallen by 3% in a year. The weaker market in the capital has seen average rents fall from £1,572 a month in July 2016 to £1,502 in May. That means new tenants in London are typically paying £70 a month less than their counterparts last summer.

Four other regions of the UK saw rents on new tenancies fall during May. The north-east of England, the south-east, Scotland, and Yorkshire and Humberside experienced falls ranging from 2.3% to 0.6%.

Martin Totty, HomeLet’s chief executive, said its figures suggested that landlords “are now facing a difficult balancing act between ensuring rents are affordable for tenants in a low real wage growth environment while covering their own rising costs”.

The most recent government figures show that in England alone 4.3m households are renting privately.

In April, the lettings agency Your Move said London had seen a sharp fall in rentsover the previous 12 months, reflecting the fact that many people looking for rental properties had switched their focus away from the capital.

Some commentators have suggested that tenant demand has been falling, particularly in London, possibly as a result of Brexit, while others have said a weaker sales market had prompted some homeowners to let out their homes rather than putting them up for sale. On 1 June, Nationwide said house prices had fallen for the third month in a row, for the first time since the height of the financial crisis in 2009. Its monthly house price index showed that the average price of a home fell by 0.2% between April and May, to £208,711.