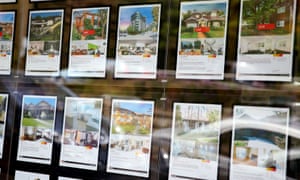 The median capital city house price has fallen for the first time in three years.

The price across all capital cities fell, albeit marginally, to $695,788 in the December quarter, dragged down by a decline in the Sydney market. The 0.4% decline followed 13 consecutive quarters of growth in the weighted average median house price, the Real Estate Institute of Australia said.

The institute president, Neville Sanders, said strong growth in Hobart, Canberra and Brisbane and marginal increases in Darwin and Perth were unable to offset falling median house prices in Sydney and Melbourne. Adelaide recorded no change over the quarter.

“Sydney, the strongest market in the recent years, showed the largest decrease in median prices, leaving some commentators speculating whether the city’s housing market has reached its peak,” Sanders said. Sydney’s median house price fell by 2.5% in the quarter.

The median house price for the capital cities was up 7.4% compared with the December quarter of 2014, with rises in each of the capitals except Perth.

“Annual growth is still strong but lower compared to what we observed over the last couple of years,” Sanders said.